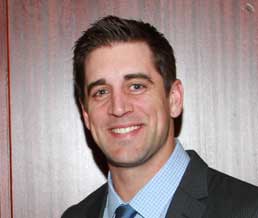 Aaron Rodgers was drafted by the Green Bay Packers with the No. 24 overall pick in the first round of the 2005 NFL Draft.  He became the Packers’ starting quarterback in 2008, and ultimately led the franchise to a win in Super Bowl XLV following the 2010 NFL season, earning Super Bowl MVP honors for his performance in the championship game. Rodgers was later named The Associated Press’ Male Athlete of the Year in 2011 for his efforts down the stretch in the 2010 playoffs and his exceptional play during the 2011 regular season, one that concluded with his winning of the NFL’s Most Valuable Player award.  Rodgers has led the NFL twice in passer rating (2011, 2012), touchdown-to-interception ratio (2011, 2012), touchdown passing percentage (2011, 2012), and once each in yards per attempt (2011) and lowest pass interception percentage (2009).

Rodgers is the highest rated passer in NFL history and is the only quarterback in history to have a career passer rating of over 100.0. He also has the lowest career pass interception percentage (1.7%).

In his nine years in the NFL, Rodgers has been active in numerous charitable projects. This fall he partnered with Raise Hope for Congo, speaking publicly about his desire to see an end to the conflict in that country. Rodgers is also an activist for the Midwest Athletes Against Childhood Cancer (MACC) fund, an organization working to cure childhood cancer and blood disorders. Together with Milwaukee attorney David Gruber, Rodgers created www.itsaaron.com to build awareness for organizations and people who are making a difference in their communities. Additionally, he has been involved with Young Life and the Make-A-Wish foundation, among many other projects.