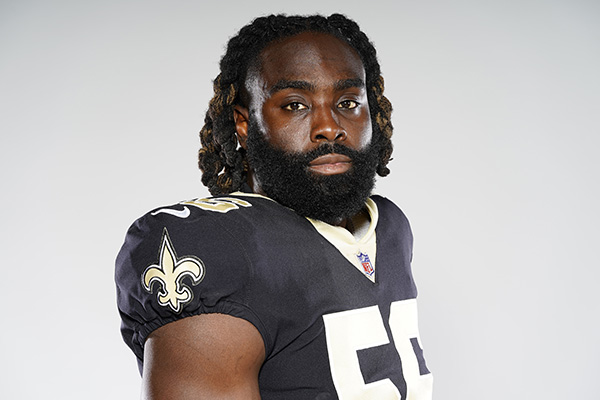 Demario Davis of the New Orleans Saints is the winner of the 2021 Bart Starr Award for outstanding character, integrity, and leadership on and off the field. Davis was selected by his peers in the NFL, making this the only award – other than the Pro Bowl – voted on by all the players.

Davis attended Brandon High School in Brandon, Mississippi, where he was a three-sport athlete in football, basketball, and track. In football, he played mostly wide receiver. He was also a starter on the Brandon basketball team and competed as a high jumper with the varsity track & field team. He was selected to the Sun Belt First Team All-State team and was named to the Clarion-Ledger All-Metro team.

While leading the Saints in tackles on the field, off the field Davis tackles challenges in life with equal fervor. Davis is known by his peers for his commitment to community service and social justice. In 2020, Davis helped launch the #SayHerName campaign to raise awareness of issues facing black women in America. His Devoted Dreamers project equips “the next generation of leaders with the tools to be successful, spiritually, mentally, and physically.”

In 2020, Davis actively demonstrated his unwavering faith as his family faced a very personal battle: doctors discovered Davis’ young daughter had a rare form of eye cancer known as retinoblastoma and had to remove her left eye. Cancer-free as of December, Davis believes his daughter’s trial provided the opportunity for his family to encounter and encourage others throughout their journey.