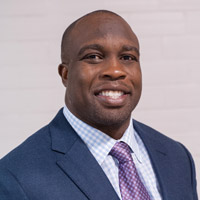 A formidable force on the field, middle linebacker London Fletcher is known for his dependability, having never missed a game in his 14 seasons in the National Football League. He entered the NFL as an undrafted rookie in 1998, starting his career with the St. Louis Rams after playing football at John Carroll University in Ohio. He played four seasons in St. Louis, five with the Buffalo Bills and his last five with the Washington Redskins. Fletcher was the Rams’ Rookie of the Year in 1998 and then helped his squad secure the 1999 Super Bowl Championship. He was selected for the NFL Pro Bowl twice.

Over his career, Fletcher has remained consistent, finishing his last 11 seasons as a team leader in tackles and leading the league at the end of the 2011 season. But his consistency off the field is also notable. He was the inaugural recipient of the Redskins’ Community Service Award in 2011 and was nominated for the Walter Payton Man of the Year Award four times. He started the London’s Bridge Foundation in 2003 to address the inequities facing underprivileged and underrepresented children. The organization hosts mentoring programs and supports projects in education, leadership, health and fitness and citizenship. Other charitable involvements include the Redskins’ Harvest Feast, school supply drives, “Fields for Tomorrow” program and visits to the Walter Reedy Army Medical Center.

A native of Cleveland, Ohio, Fletcher and wife Charne have three children: Paige, Steele and Brook