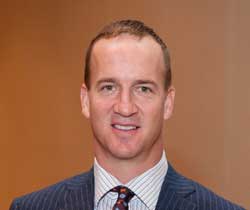 Peyton Manning completed 17 seasons in the NFL in 2014 – 14 years (1998-2011) with the Indianapolis Colts and three (2012-present) with the Denver Broncos. The only five-time MVP in league history, Manning’s 14 Pro Bowl selections tie for most in the NFL.

Manning has made more postseason appearances (14) than any NFL quarterback, and he is one of three to take multiple teams to a Super Bowl. In early 2007, he led the Colts to their first Super Bowl in 36 years and was named MVP. A member of the 2000s All-Decade Team, Manning leads the NFL in touchdown passes (530) and ranks second in passing yards (69,691), completions (5,927) and wins (179).

After missing a year with a neck injury in 2011, Manning returned as a Bronco and was named NFL Comeback Player of the Year in 2012. His record-breaking 2013 campaign (5,477 yards, 55 TDs) earned him Sports Illustrated’s Sportsman of the Year.

Manning, the No. 1 pick in the 1998 NFL Draft from the U. of Tennessee, began the PeyBack Foundation in 1999. It has provided more than $10 million to at-risk youth in Colorado, Indiana, Louisiana and Tennessee since its inception.

Manning also invests his time and leadership in the St. Vincent’s Children’s Hospital (Indianapolis), which in 2007 was renamed the “Peyton Manning Children’s Hospital at St. Vincent.” He serves on the American Red Cross National Celebrity Cabinet and the Pat Summitt Foundation. The Peyton Manning Scholarship program at Tennessee has honored 20 incoming college students in the last 16 years on the basis of academic achievement, leadership and community service. Manning received the Byron “Whizzer” White Humanitarian Award in 2004 in addition to being named the NFL’s Walter Payton Man of the Year in 2005.

Peyton and his wife, Ashley, have 3-year-old twins.