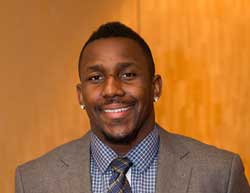 In his 11-year career with the Carolina Panthers, Thomas Davis has made a massive impact, both on and off the field. A five-year team captain, in 2012 Davis became the first known NFL player to return for a full season after three ACL reconstructions on the same knee; and in the last three years, he’s played some of the best football of his career.

Selected as the 14th overall pick in the 2005 NFL draft from the University of Georgia, Davis puts his shoulder into as many charities as he does enemy ball carriers. In 2008, Davis and his wife, Kelly, started the Thomas Davis Defending Dreams Foundation (TDDDF), a nonprofit dedicated to providing and promoting free programs that enhance the quality of life for more than 2,000 underprivileged children and their families annually. Since its inception, the foundation has distributed more than $500,000 in aid.

Based on the principles of educate/empower/defend, the foundation’s cornerstone program is the Youth Leadership Academy, a 14-week after-school mentoring program for low-income middle school students. The academy emphasizes areas like etiquette, public speaking, leadership and community involvement.

The Defending Dreams Foundation provides a variety of other programs free to participants. The annual youth football camp serves over 350 young boys and girls and emphasizes the importance of a healthy diet and exercise in addition to teaching proper football fundamentals.  To kick off the school year, the foundation hosts an annual back-to-school supply giveaway, providing over 600 supply-filled backpacks to low-income students. Every November, Davis takes his teammates to a local restaurant to serve clients of the Battered Women’s Shelter a hot Thanksgiving meal. TDDDF also holds an annual Christmas giveaway, distributing presents in communities throughout the Carolinas and Davis’s hometown in Georgia.

In addition to the personal time and commitment he gives to his foundation’s programs and fundraising efforts, Thomas is also actively involved with the American Heart Association’s Mid-Atlantic Chapter, the Second Harvest Food Bank, Levine Children’s Hospital and the Muscular Dystrophy Association.

In April of 2014, Davis received the Call to Courage Award, given annually to a Christian athlete who displays exemplary character through both adversity and triumph. Davis was also recognized in 2014 as the  Walter Payton Man of the Year.